Rizumu is a Prism Star who works at Pretty Top, and is a member of MARs, and a main character in Pretty Rhythm: Aurora Dream. She is the daughter of Sonata Kanzaki, a previous Prism Queen who became a legend because she suceeded in jumping the legendary Prism Jump, Aurora Rising. She lives only with her father, Ryutaro, as her mother left when she was only a baby, obsessed with completing the true Aurora Rising. Her keepsake from her mother is her beloved Teddy Bear, Andy. She is basically dating Hibiki, although they never express this verbally. Because of this, she gets a lot of negative glares from Kanon, who is his sister who is obsessed over him.

Rizumu at 18 years old in Dear My Future. 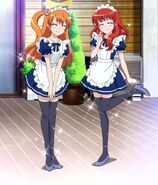 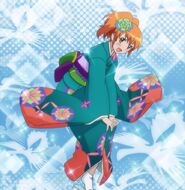 Rizumu, her sister, and mother.
Add a photo to this gallery

Retrieved from "https://puritirizumu.fandom.com/wiki/Rizumu_Amamiya?oldid=4476"
Community content is available under CC-BY-SA unless otherwise noted.