Rizumu as seen in Dear My Future

Rizumu (at the right) during the Road to Symphonia

Rizumu in Dear My Future 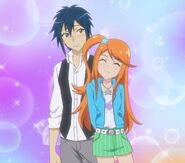 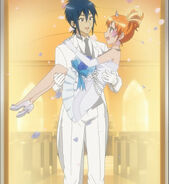 Rizumu dancing "You May Dream"

Rizumu Amamiya (aka Rizumu Toudou) is a Prism Star who is a part of Pretty Top, a member of MARs, and a main character in Pretty Rhythm Aurora Dream. She is the daughter of Sonata Kanzaki, a previous Prism Queen who became a legend because she succeeded in jumping the legendary Prism Jump, Aurora Rising. Her dream is to jump the Aurora Rising so her mother, who left her family 12 years previous, would see her somewhere and come home. She dated Hibiki from middle school till high school, and married him when she was 17. Because of this, she gets a lot of negative glares from Kanon, his sister who is obsessed over him. She was born under the Skater Goddess Constellation like Aira and Mion.

Rizumu usually has a very energetic personality.She is very good at dancing.She seems to be knowledgeable about love from certain book of hers. She gets riled up when anything involves food, especially when that food is meat. She is easily angered, however, and will yell whenever she does not like someone's attitude. She is easily smitten when she thinks of Hibiki, but is angry when Kanon keeps him to herself. This light personality is immediately erased when it comes to her mother and the Aurora Rising, which she so very much wants to jump. She will get completely serious and lose sight of her surroundings, and she becomes very passionate. For her goals, she will do most anything, even losing her heart.

Role in the Plot

Rizumu is chosen along with Aira to become Prism Stars for Pretty Top. She shows utter passion at the chance to become a Prism Star. She tells Aira the reason that she wants to become a Prism Star is so that her mother, who disappeared when she was just an infant, would see her jumping the Aurora Rising, a jump that only her mother herself had jumped, and return for her. At first, Rizumu is a bit stand-offish; she didn't have any friends before Aira. This may be due to her harsh past of her mother leaving the house. However, with their clicking personalities and interest in Prism Shows, Aira and Rizumu soon become the best of friends. They also attend the same school and even the same class. When Rizumu is failing her tests and also loses her spot as a Prism Star because of it, Aira helps her get her grades back up.

Rizumu soon meets Hibiki, and they get along very well. Later, she finds him practicing at his "secret place", which they keep as a secret for only the two of them. Hibiki is thought to be a cool, calm prodigy who doesn't have to practice much, and he doesn't want his friends and fans finding out that he practices extra to improve himself further. After this encounter, they both start to have feelings for each other.

After Aira became Prism Queen, Rizumu and Mion, having no real plans for what to do next, accepted Aira's offer to restart MARs since they had completed their previous goals. They are still active as Prism Stars 3 years in the future. At the training trip with both Prizmmy☆ and PURETTY, Rizumu gives advice to a worrying Hye In and the rest of the girls. She still has a major appetite, stealing Mia's lobster at dinnertime.

Later on, it is revealed that in fact Rizumu and Hibiki have been married for a year and a half, but have hidden this and have not been living together in order to not upset the fans. When Rizumu turns 18, she and Hibiki decide to announce their marriage at a Prism Show. Many fans were unhappy, until P&P conveyed the meaning of "gratitude" through their song. After P&P's performance everyone gave them their blessing, and even Kanon calls Rizumu "Onee-chan", meaning "big sister".

Rizumu later gives Aira advice on her relationship with Shou, wearing a wedding ring and her wedding announcement in the paper. She tells her that since she and Hibiki made it work, why can't they try dating. She warns Aira that if Shou waits too long, he's going to let go of what's precious to him. She then runs off after she realizes she has to go home and make dinner for Hibiki, revealing that they are now living together. In Mia's vision of the future, the couple have a child of their own.

Community content is available under CC-BY-SA unless otherwise noted.