Start a Wiki
The Prism Watch (also known as Prism Cordinate Watch) is a device added to the Prism Stone Shop in Episode 16.

It is said to be an item to increase it's owners luck, and it's main appeal is the additional charms one can purchase to put on it, said to increase the wearers skills.

The Prism Watch is a solid colored strap with a small bump on the center, where the small screen depicts the time and various details above two, tiny white buttons. Several eyelets in the shape of hearts decorate the band, where charms are inserted.

After Aira and Rizumu heard a bunch of girls discuss the watches, they shot right over to Prism Stone to purchase some. Their dancing and movement had improved, which they credited to the Watches, along with their random luck: like getting free sweets and various presents, and an increase in love-power.

As a gesture of friendship they offered their bracelets to Mion, who used them for her performance and later returned them.

At one point the toy variant was produced for fans of the series to pick up. It resembled the watch as seen in the anime, and depending on the color came with the following charms: 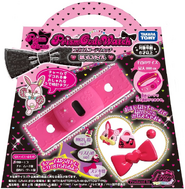 Lovely Model Set
Add a photo to this gallery
Retrieved from "https://puritirizumu.fandom.com/wiki/Prism_Watches?oldid=26678"
Community content is available under CC-BY-SA unless otherwise noted.