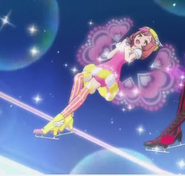 June having Star Wings in a flashback
Add a photo to this gallery
Decorative wings composed of three silver-blue petals, each with two lines, a pale blue star, and row of blue tiny dots in them, along with dark blue glowing light. Between each wing is a glowing pale blue and lilac design of lines and several dots. On top of this is a pale indigo band with four indigo and white petals attached to it with a very bright, sky blue light shining from them.

Retrieved from "https://puritirizumu.fandom.com/wiki/Prism_Feathers?oldid=20462"
Community content is available under CC-BY-SA unless otherwise noted.