Start a Wiki
The Batopon (named after it's functions; the Pom Pom and Baton), is an item for Prism Shows that the Stars can obtain from their Managers or the Company they work under.

The Batopon corresponds with the Fashion elements, although only three color variants are shown to exist: Pink for Lovely, Purple for Cool, and Blue for Pop.

The Batopon comes in two forms. The Baton form, is a long white stick with two rainbow glowing sections that leave a light trail behind them. The Pom poms on the end are made of two colors, mainly composed of the users fashion element or type, with small amounts of white.

To separate the Batopon into it's Pom Pom form, the user simply pulls near the glowing sections and it becomes two separate sticks with a single pom pom on each end. The users pushes them together to combine it again.

A black variety was also shown to exist, which replaces everything white with black.

The baton is an appealing item for Prism Stars to use during shows or aid them with brand new Prism Jumps.

It has been said that one may choose to use the pom pom function during moments of a song to perform as a cheerleader, then while they skate or reach the crescendo, form it into the baton to twirl and toss.

It's appealing points are the glowing light segments and fluffy, glittery pom poms. But despite this, the Batopon is very strong and can be used to hold someone, as well as form strong gusts of wind.

The Batopon toy was produced in correlation with Aurora Dream. The pom pom portion appeared to be stiff and made of plastic pieces, some solid in color, the others shiny material. The stick was shown to be a pale coloring of the color (pale blue for bright blue, pale pink for hot pink), although variants in the Baton form were shown with a white stick. 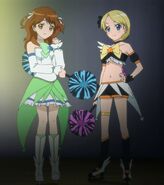 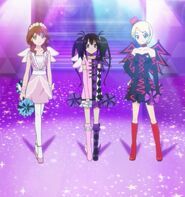 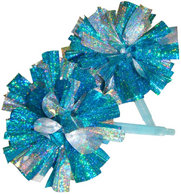 Add a photo to this gallery
Retrieved from "https://puritirizumu.fandom.com/wiki/Batopon?oldid=20409"
Community content is available under CC-BY-SA unless otherwise noted.